Cause of Death: Died of wounds received near Rhenoster Kop

Service and Life Before the Boer War: Thomas was born in Cathcart near Bombala in 1878. He was a member of the Bega Troop of the NSW Mounted Rifles.

Colony or State of enlistment: NSW, Place of Enlistment: Bega

Highest Rank attained (if served after war): Did not survive the Boer War 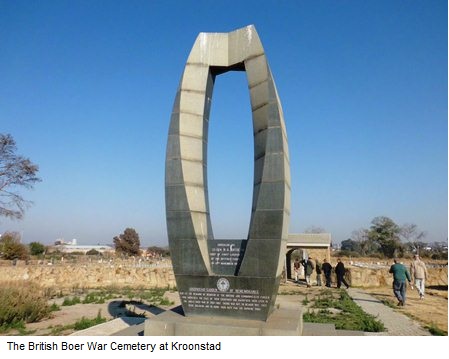 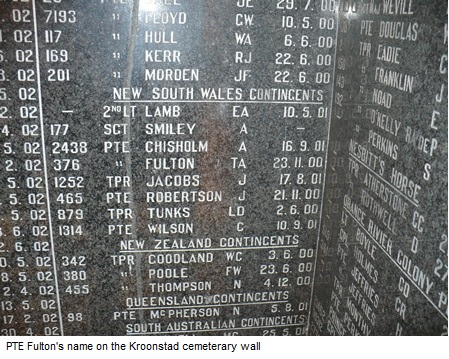 Details of service in war: February 1900 - Nov 1900 in Free State, Transvaal, and western Cape Colony including charge at Diamond Hill (12 June 1900) Writing from Kroonstad on November 18, the special correspondent of the 'Herald,' gives the following account of an encounter between the Boers and a patrol party of an officer and 15 men of the NSW Mounted Rifles at Rhenoster Kop :- Lieutenant W. Newman, of C Squadron, was in charge of our detachment. The three parties all moved out soon after 18:00, Kitchener's Horse going off to the left, the Western Australians to the right, and our men being in the centre. I need only concern myself here with the doings of our own follows, Having covered several kilometres of country, the party halted near a farmhouse for dinner, Lieutenant Newman having stationed Troopers C. Hughes and T. A. Fulton (C . Squadron), and Troopers Foulston and Jamieson (D Squadron) at observation posts on the ridge above, separated about a 1500 metres from each other. After dinner the party started to return, and almost instantly saw coming towards them what appeared to be one of the other patrols that had gone out in the morning with them, for the newcomers wore khaki tunics and advanced in perfect extended order, headed by an officer. 'They must be Darling's Western Australians,' concluded Lieutenant Newman, but in order to make perfectly certain he ordered Sergeant A. Smilie and Trooper Clarke (D Squadron) to ride on and ascertain who they were. These two had not gone very far before the identity of the approaching party was settled beyond all doubt, for some of them dismounted and fired, while others fired from their horses. Sergeant Smilie and Clark also at once dismounted, and immediately the former's horse galloped off. He ran a few metres after it, and then fell severely wounded by a bullet which entered the small of his back and came out at his stomach. Clark managed to effect his escape, and the remainder of the party, unable to face the heavy fire of the enemy, retired with the Boers in pursuit. Jamieson and Foulston, seeing the turn events had taken, started off with the object of joining their comrades, but Jamieson's horse was shot and his mate waited behind with him, both being taken prisoners when the Boors came up to them. One was about to shoot Foulston, whom he said he recognised, when ho was prevented from doing so by the officer, who, unlike the usual Boer leader, wore two stars on- his shoulders and one on his hat. He had come up too late, however, to prevent the prisoners being robbed of all they had on them, but he assured them they would not be ill treated, and expressed the hope that they would tell the British how well they had been treated, so that should they capture any Boers the example might be followed. 'I don't think you have treated us very well, said Foulston. 'How is that? asked the officer. 'Well,' was the reply, ' your men have taken everything from us, even our overcoats, though it is raining so heavily (rain had been falling neatly all day). Oh, well, here are your coats, and that is all I can do for you. You can clear now, and you had better go and look after your mate, who is lying wounded up there.' Jamieson and Foulston, thankful for their escape, hurried in the direction of where Smilie had fallen, and found him suffering intense pain. As gently as possible they carried him to the farm house to which reference has been made and which -was occupied by a Dutch farmer and his family, one of the daughters, it was gathered, being engaged to be married to the Boer officer whose treatment of our men had been so considerate, Jamieson thon hurried into the camp, and the ambulance waggon, with Captain Cortis in charge, was soon on its way to the farmhouse. Jamieson had been gone an hour or two when those at the farmhouse were startled by the appearance of a man covered with blood and be weak that he could scarcely stand. This was trooper Hughes, who, though shot through one arm, and the fleshy part of both thighs, had pluckily worked his way from his observation post to the farmhouse to obtain assistance for his companion Fulton, who bad been wounded more seriously. Hughes and Fulton had seen the approach of the party of Boers, but, like Lieutenant Newman, were deceived into the belief that they were our own men, concluding that two men whom they noticed coming in their direction were the relieving post. Not more than 200 metres separated the pairs when the Boers fired. The New South Wales men fired in return, but realizing the certainty of being surrounded by the party if they remained hurried to their horses. Hughes was bending down untying his horse when struck. 'I'm done for Tom,' he said; and instantly Fulton said? And so am I,' for a bullet had entered one of his shoulders and issued from the other. When the Boers came up they took all of value, that Fulton had, but passed over Hughes. The two unfortunate fellows layin the rain for some time until at last, as already stated, Hughes managed with great difficulty, to find his way to the farmhouse. The farmer quickly got his Cape cart ready, and with Jamieson drove to where Fulton was lying, bringing him also to the farmhouse. So here were three New South Wales men all very badly wounded. They were treated with much kindness by the Dutch people; but the daughter of the house while busying herself preparing coffee, attending to the wounded, etc., sang, and kept on singing, 'Praise God from Whom all Blessing Flow'.

It should have been mentioned that an other private named Williams was also taken prisoner, but, like the others, allowed to go after his captors had helped themselves to his belongings. Captain Cortis at once pronounced poor Smilie's case hopeless, and so, indeed, it proved, for about 19:30 the following morning he breathed his last. That afternoon his remains were interred, the burial ceremony being performed by Rev. Father Fagan, who read the beautiful service of the Church of England. Sergeant Smilie, who was noted for strict adherence to duty, had for some years been engaged in mining pursuits in different parts of New South Wales. He came out with the second contingent, and had been with the regiment all through, and now, with the end of the war, and the return home in sight, the ' last post' for him was sounded. Both Hughes (who hails from Wyalong) and Fulton (Bega) bear their sufferings with great fortitude. They were yesterday taken into Kroonstad hospital, and the doctors are hopeful of recovery in each case. It being considered that the 2nd MI, Corps, in its present reduced condition, was not sufficiently strong to hold the position at Rhenoster Kop, we moved yesterday afternoon to a spot six to eight kilometres nearer Kroonstad, where we are now awaiting reinforcements.

Our Boys in Battle. The following letter has been received from Bugler George Nugent. "The Boers kept firing and hit Hughes as he was stooping to untie his horse. He cried out to Fulton "I'm done Tom," and had no sooner cried out than Fulton said ' Oh God, so am I." Fulton was hit in the shoulder, and the bullet went clean through him and out through the same place in the other shoulder. When Hughes was hit the bullet broke his arm and then went through both his legs. Two other bullets went through his coat within half an inch of his body-so he had a pretty close shave of it. The Boers took their rifles, etc but their officer would not allow them to touch anything on them. When the Boers went off, Hughes walked two kilometres to the farm to get help for his mate. He had a-bullet in the fleshy, part of each leg and his arm smashed-and yet he walked a 1500 metres for help. It makes, a chap feel all the worse when such men get sniped by the Boers. When he got to the farm he met the others there with Smiley; so they got a Cape cart and went for Fulton, and got him to the farm just as the old Ark got up, so the lot went into camp. When the girl at the farm saw Hughes come in with his arm and legs covered in blood she got in real good spirits on account of another khaki getting wounded, and started singing "Praise God from whom all blessings flow.", She got them some coffee though and fixed them up a bit. Sergeant Smiley was shot through the stomach and died next day. Hughes and Fulton are in my company and are as good mates as any chap could have. --They are splendid fellows, and as plucky a pair as any of them When one goes under, it is more like losing a brother than anything else, as there are so few of now. We have been together ten months, and all who are lost are real decent chaps. Fulton and Hughes were taken into Kroonstad on Saturday, and I think it will go hard with Fulton. It was a bad day's work."