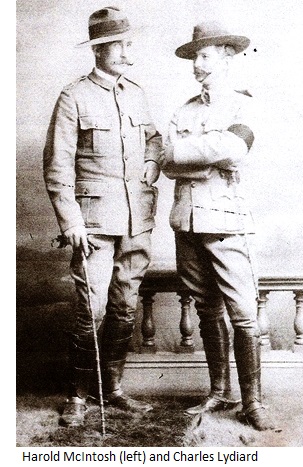 Cause of Death: Died of wounds received at Gaza whilst commanding 12 LHR

Service and Life Before the Boer War: Harold McIntosh (1868-1917), grazier and soldier, was born on 14 June 1868 at Bathurst, New South Wales, eighth child of John Nepean McIntosh, solicitor, and his wife Mary Ann, nťe Black, both Australian born. He was educated at All Saints' College, Bathurst, where he was a good student and a gifted sportsman; in his final year, 1885, he was school captain. After graduating from the University of Sydney (B.A., 1889) he served his articles with his father's firm, McIntosh & Co., before going on the land at Rockley, near Bathurst.

When a half-company of the New South Wales Mounted Rifles was raised at Bathurst in 1895 McIntosh was one of the local horsemen to join. In 1897 he accompanied a privately funded detachment from the regiment to England to compete in military tournaments and to train with British Army regiments. The tour culminated in the military celebrations for Queen Victoria's Diamond Jubilee. He was a sergeant two years later when he joined the regiment's special service squadron raised for active service in South Africa

Colony or State of enlistment: NSW, Place of Enlistment: Bathurst

Other Boer War Service: Also served as an officer in the 2nd NSW Mounted Rifles 1901-02

Memorial details: Kantara War Cemetery. Kantara War Memorial Cemetery is situated at Kantara East on the eastern side of the Suez Canal, 160 kilometres north-east of Cairo and 50 kilometres south of Port Said.

Personal Characteristics: Gifted sportsman, grazier and soldier. A leader in civic affairs, Harold McIntosh was also an outstanding soldier who had risen through the ranks to command a regiment on active service. He 'was a daring leader, much loved by his men' and his death 'cast a gloom over the whole of Bathurst district'

Reasons to go and fight: Saw the war as patriotic and was a serving volunteer

Details of service in war: 'A' Squadron, New South Wales Mounted Rifles, embarked from Sydney in November 1899 and was one of the first Australian units to arrive at the front. Sergeant McIntosh took part in all its major operations including the relief of Kimberley, the action around Paardeberg, the entry into Bloemfontein and the capture of Pretoria. He was commissioned lieutenant while on service and returned to Sydney in January 1901.

Served in the western Transvaal under the command of Major-General Featherstonhaugh (pronounced Fanshawe) from 23 April to 1 October 1901, the principal operations being the capture of Potgieters convoy on the Vaal 24th of May, 1901; capture by the regiment of General De la Rey's convoy of 106 wagons, and a large quantity of cattle and ammunition. (Bessieslaagte) Served in the eastern Transvaal under Major-General Featherstonhaugh; engaged in many night marches in resulting in over 1000 prisoners being captured.

The regiment served under Col Ingouville Williams (Brigade Commander) throughout, with the exception of six weeks when the column was commanded by Lieutenant-Colonel Lassetter. (CO of 2NSWMR) During the year of 1901 it travelled 4000 miles (on foot and horseback) in every part of the Transvaal. One specially noteworthy feature was that, whilst constantly engaging the enemy only 18 men were taken prisoners and of them the large number were on the first fight at Korannafontein and through no fault of the men. No column has made more night marches; one march made on the night of 11 March 1902 from Brugspruit over the difficult Wilge River to Dorneck, a distance of 72 kilometres which, with the return journey makes a distance of 144 is worthy of mention.

Service and life after the Boer War: On 5 October 1904 he married Florence May Lee at All Saints' Cathedral, Bathurst. Returning to his family's property, Bunnamagoo, which he managed, in 1907 he was elected a local shire-councillor and was three times president. He was also active in his school's old boys' activities.

McIntosh enlisted as a captain in the Australian Imperial Force on 4 May 1915 and on 1 June was appointed to command 'B' Squadron of the 12th Light Horse Regiment with the rank of major; he embarked for Egypt that month. On 29 August the regiment landed at Gallipoli where it was broken up to serve as reinforcements for other light horse units. Next day he was wounded in the thigh and evacuated and eventually sent to England to recuperate. The 12th L.H.R. was being re-formed in Egypt when McIntosh rejoined it. He was appointed second-in-command in February 1916 and commander in June; his promotion to lieutenant-colonel was confirmed on 11 August. The regiment operated in Egypt and Sinai and in October took an active part in the sharp action against the Turks at Maghara.

Early in 1917 the 12th LHR became part of the reorganised 4th Light Horse Brigade and prepared for action on the Gaza-Beersheba front. McIntosh led his regiment in the second battle of Gaza where on 19 April it was heavily committed at Atawineh Redoubt. During the battle the diminished 4th Brigade captured an enemy position at Two Tree Farm and soon afterwards came under heavy fire while advancing dismounted. In the face of increasing shell and machine-gun fire the 11th and 12th Regiments were forced to halt and flatten themselves in barley crops with red poppies. McIntosh was hit by shrapnel, a pellet severing an artery in his groin. He was evacuated for treatment but on 24 April 1917 his wound reopened as he lay in a hospital train at El Arish and he was found dead in the morning.