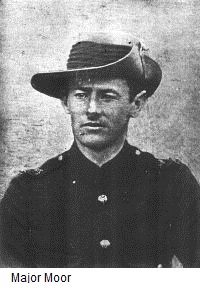 The son of the Rev Canon Moor, of St Clement's, Truro, Cornwall, England, he was born in July, 1871 and educated at Shrewsbury School. Major H.G. Moor was commissioned into the Royal Artillery in November 1890 after previous service in the militia and spent the next three years serving in a garrison company in Mauritius before returning to England. He was promoted lieutenant November, 1893 and captain, October 1899. He was transferred to No 10 Mountain Battery in Natal, South Africa, serving as Garrison Adjutant for 13 months before a secondment to the British South Africa Company (employed with the British South African Police), to reorganise their artillery during their confrontation with the Matabele and Mashona tribes in Rhodesia in 1897. He was Mentioned in Despatches, London Gazette, 18 February, 1898. Shortly after returning to Natal he was transferred to Wales.

In June, 1899, he was appointed to command the Permanent Artillery Garrison at King George's Sound, Albany in Western Australia, with the local rank of major, arriving in August 1899. His timing, for a professional soldier, couldn't have been better, for he was quickly chosen to command the 1st WA Infantry being raised for service in South Africa with the rank of Major as hostilities broke out in October 1899.

The Western Australian infantry company of 130 officers, non commissioned officers and men, under the command of Major Moor, left Albany on board the Medic on 7 November 1899, arriving in Cape Town on 27 November. They were accompanied by infantry companies from Victoria, Tasmania, South Australia and Victoria. In Cape Town the companies were amalgamated to form the First Australian Regiment under the command of Colonel J C Hoad of Victoria. This was the first time that a unit representing the various Australian colonies had been formed for active service. The newly formed regiment left for De Aar to join the Kimberley Relief Force and were active in the lines of communication between De Aar and Modder River. Major Moor's company was at Naauwpoort, when it was converted to Mounted Infantry on 1 February 1900.

Major Moor led his men in operations and actions in Transvaal and the Orange Free State. On 9 February Maj Moor led 1 WAMI into its first action at 'West Australia Hill' on 9 February1900. He led a patrol of Inniskilling Dragoons and more than 20 West Australians, encountering nearly 400 Boers on kopjes east of Slingersfontein. The enemy opened fire, the Dragoons retreated and the Australians kept up the fight until nightfall. At Slingersfontein, he narrowly escaped being killed through assisting a wounded man and giving him his horse. The following day General Clements, the divisional commander praised, Major Moor and his men for their determination in frustrating the enemy's attempt to turn the flank of the position. It was also in this first engagement that the unit took its first casualties. He continued to take the unit into various actions for the next 5 months, demonstrating outstanding leadership in the face of Boer fire. Major Moor was the officer who rallied the West Australians, and led them in the dash against Botha's rearguard at Diamond Hill, taking part in a running fight lasting some 13 kilometres.

Palmietfontein, an action fought on 19 July 1900 some 75 kilometres east of Kroonstad in the Orange Free State, during the first British attempt to hunt down and capture the Boer general, Christiaan de Wet, while he was making north towards the Transvaal with 1,500 men. The engagement took the form of a running fight over about thirteen kilometres, after two British brigades came upon de Wet's supply convoy at 14:00 and tried to halt it. While horse artillery in the British centre shelled the last wagons in the enemy column, which extended over five kilometres, the mounted infantry commanded by Brigadier-General G.P. Ridley (which included the New South Wales Mounted Rifles and Army Medical Corps, along with the West Australian Mounted Infantry) continually pressed in against the Boer flanks.

De Wet had assigned a small division of his commando under the noted scout leader, Danie Theron, to protect the convoy, while he travelled about twenty kilometres behind with the bulk of his men to guard its movement. Theron mounted a vigorous defence against the harrying tactics of the British, suffering little damage himself but successfully mauling the West Australians under Major Hatherley Moor. At dusk Theron broke contact and disappeared after the convoy, which by now had made good its escape, and the pursuit was broken off.

It was during this action that Major Moor, and four other members of 1 WAMI were killed. Major Moor was critically wounded and died later that day. One of his troopers, Private Dickman tells the story:

"It was about 15:00, and we were very much excited. We had shot down the Boer horses attached to a gun, and were anxious to take the gun. I was on the right when my horse was shot under me. Major Moor called out to me, 'Follow me to the left cover. About 50 metres further on the enemy fired a volley at us from about 300 metres distant, and he and I dropped. I was on foot at the time. Eighteen horses were shot. Privates Wheeler and Hutchison carried Major Moor from out of the line of fire, although he asked them to leave him alone believing that as he was mortally wounded they would be better employed in attending to those who were less hurt. Sergeant Edwards asked Major Moor whether he had anything to say, but be replied, 'No, I have prepared everything before hand.' He was terribly wounded in the hip and side by an explosive bullet, and he lived for about a quarter of an hour afterwards without showing any outward signs of pain."

Private Ashmore, who was Major Moor's galloper or despatch rider, adds that just before they got to the top of the ridge occupied by the Boers. Major Moor sent him to question a local native, whom they saw driving cattle in the valley in the distance, as to which way the enemy had gone. He was unable to reach the native. When he returned he found Major Moor in the open on one knee firing. Moor ordered his men to move to the left for cover, and Private Ashmore was immediately hit by a bullet.

He was Mentioned in Despatches by Earl Roberts, 1 March 1902.

He was buried first at Palmietfontein, but his remains were reinterred twice, his final resting place in Lindley's Garden of Remembrance, where the headstone records his British South Africa Medal for his work in Rhodesia in 1897, and the Queen's South Africa Medal with clasps for Johannesburg, Diamond Hill, Wittebergen and Cape Colony.

On the right side of the memorial window placed in the chapel of Shrewsbury School in remembrance of fourteen Salopians who fell in South Africa, is depicted a realistic scene from the Boer War. In this representation Major Moor is shown defending a kopje (West Australia Hill) near Slingersfontein. On the occasion referred to, he, with his West Australians, held this position against great odds. There is also a plaque to his memory in St John's Anglican Church, Albany Western Australia.