When Lieutenant Gideon Grieve, a Permanent Special Services Officer in the New South Wales Military Forces, volunteered for service in South Africa at the outbreak of the Boer War in October 1899 he left his wife and three children to sail for a month to Cape Town. He arrived in the first week of December and was immediately posted to assist the civil railway authority to get the thousands of British and colonial troops and all their horses and wagons that were landing daily up to the front in Orange Free State and Transvaal.

That same first week in December 1899 - "Black Week" - the British forces suffered the worst defeats they were to endure for the whole war. The Boers did not stand up in lines to exchange volleys of rifle fire but hid behind rocks, dug trenches and, in the face of serious opposition, took to their horses to fight another day. From their concealed positions, using modern German rifles and field guns, they inflicted terrible damage on the traditional lines of soldiers marching steadily towards them. Worse, the British officers wore uniforms with different hats and with polished insignia that made them easy targets for snipers.

The Highland Brigade included the 2nd Battalion Black Watch, professional soldiers battle-hardened in India and Afghanistan, wearing their swirling dark green kilts. Ordered to attack a hill at Magersfontein, their losses were enormous, with a disproportionate number of junior officers killed and wounded.

At the end of Black Week, the whole time Gideon Grieve had been in South Africa and had worked with the railways, he was posted to the front to replace a company commander, the captain of the Black Watch's T Company. In the next few weeks Grieve won the confidence of his men as he led them in infantry actions along the Modder River on the way to the relief of Kimberley.

Perhaps he was helped because his accent was Scottish (he had emigrated from Edinburgh) but more likely it was because he possessed all the qualities that make a leader of men overlaid with sound military training. In one action Lieutenant Grieve took his tough fighting men into attack at Koodoesberg. His leadership was recognised by his battalion commander with a 'mentioned in dispatches'.

When ordered into battle at Paardeberg to attack a Boer position entrenched half way up a hill the Black Watch ran across the flat ground leading to it but was cut down by rifle, machine gun and pom pom fire. The machine guns were German Maxims, the pom poms fired a one pound round at the rate of about 40 per minute, giving rise to their name. Even lying flat on the ground failed to protect the Scottish troops since there was absolutely no cover and the Boers were firing low from their trenches.

Although wounded himself, Grieve ran forward to pick up a more severely wounded soldier and both were killed.

This was heroism in self-sacrifice, the stuff of legend, which deserves to be remembered - indeed lest we forget - as part of Australia's cultural heritage. 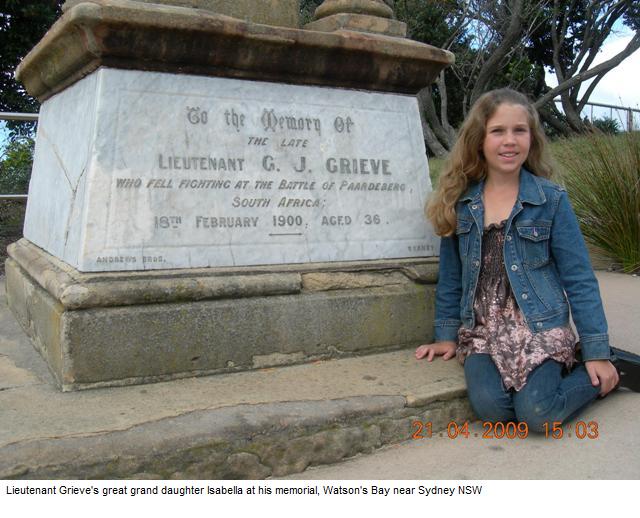 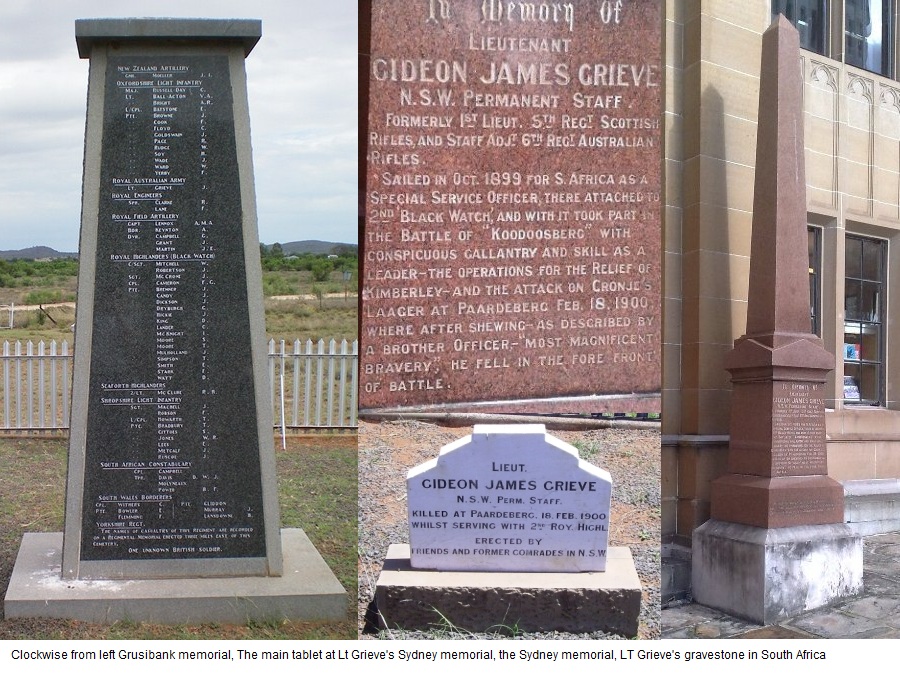