A patrol's horses step carefully through the sparse and arid landscape sloping down from the back wall of the memorial. Each soldier keeps an eye on his mates while looking out for signs of booby traps or potential for an ambush, for the tell-tale wheel tracks of big guns or supply wagons. For snipers. Smoke from campfires. Friend or foe.

Louis Laumen's statuary pays tribute to both the men and the horses that suffered the privations of war: burning sun and frosty cold, rain and sticking mud, hard dry wind and dust, the roughness of the veldt, barely survival rations, suspect water, lice. Both soldiers and their horses susceptible to fatal diseases and accidents as well as the occupational hazard of all soldiers, disfiguring wounds and agonising death.

The patrol section could be from any contingent sent, whether called Lancers, Bushmen, Rifles, Gunners, or the Medics and their Stretcher Bearers. After a few months they all looked the same, spit and polish faded to khaki chameleons melding into the veldt.

This memorial recognises that all Australian troops in the Boer War were mounted or dependent on horses to tow their ambulances, artillery and supply wagons, to match the highly mobile Boer soldiers. It recalls their endurance and sacrifice, cast in enduring bronze. 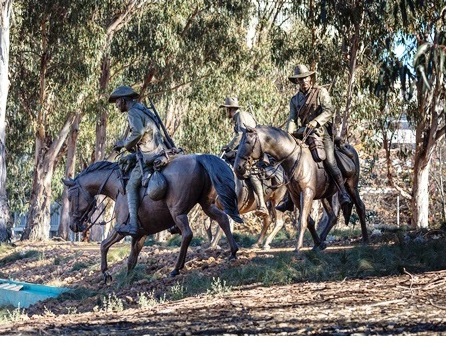 The walls grow out of the natural landscape to frame the action to tell our stories: an outline of Australians' part in the war, a verse from Banjo Paterson, and extracts from a soldier's letters home.

The front wall provides space for wreath and poppy tributes. Its six parts remind us that Federation united the six colonies into the Australian nation during the 33 months of the Boer War. The nation's first war is a significant event. Engraved unit lists, including the nurses serving for the first time in Australia's military history will be added,

The higher back wall provides a horizon for the site's South African environment. The natural Australian eucalypt bushland is the backdrop to all of the memorials along ANZAC Parade.

The most difficult design task has been to link the time when the Boer War took place, celebrated then by great landscape artists like Tom Roberts and Arthur Streeton, simultaneously recognising that the memorial is actually being erected at this time in the 21st century and how the present is represented by more contemporary landscapes of Russell Drysdale and Sydney Nolan.

A modern memorial, visitors to the site are able to walk among the statues in touching range to get something of the sensation of being with the soldiers on the veldt, sharing the hardships of operating in a hostile environment. While the vegetation and the shapes of the hills in South Africa are different, both bush landscapes have uncanny similarities evolved to cope with low rainfall. The air is crystal clear, but easily becomes dusty or smokey, the light is harsh, sunrises and sunsets brilliant.

Between the bitumen of ANZAC Parade and the gradual beginning of the memorial the designers have ensured that there is space for commemoration ceremonies.

This magnificent design suits the commemorative purpose, sits well in the site and it complements the memorials to later conflicts that are already erected along ANZAC Parade.