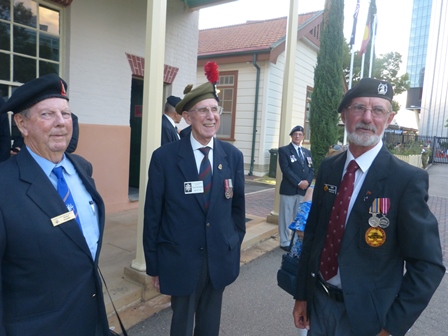 John Haynes joined the Royal New South Wales Lancers in 1948 as a trooper, he was Commissioned in the Regiment in 1950.

Soon after he transferred to the Regular Army, serving in 13 different Royal Australian Armoured Corps units.

His last posting was Inspector of Administration for the Army.

He retired from the Army in the mid 1980s and became the President of the Royal Australian Armoured Corps Association, New South Wales Branch (RAACANSW), later serving as President of the National Association. In this role he instituted a number of successful initiatives for soldiers including the Army Combat Badge, the medal for National Service and the Australian Defence Medal.

For these good works he was awarded the OAM.

At the opening of the Light Horse Interchange west of Sydney in December 2005, Colonel Haynes struck up a conversation with the then Prime Minister John Howard. They noted that the service of Australian Soldiers in the Boer War was not commemorated at a memorial in the nation's capital, Canberra.

The National Boer War Memorial project was born. Colonel Haynes gathered a group of volunteers initially under the banner of the RAACANSW and work started. Committees were formed throughout Australia, and funds raised. Those whose relatives had served in the war were encouraged to tell their stories and these were published on the Memorial Association's internet site, a place where all matter of material was to appear. To garner support volunteers gave presentations to any group interested. A design competition was held. The designs submitted did not meet with approval, an amalgam of designs was agreed on. Then the costing came. For the result to be achieved a figure just short of $4M was needed. Many thought this a bridge too far. Not John Haynes, he called on support from every quarter and eventually on 31 May 2017, His Excellency, General the Honourable Sir Peter Cosgrove AK MC (Ret'd) Governor-General of the Commonwealth of Australia dedicated the memorial in Anzac Parade, Canberra.

For this effort, in the Australia Day honours 2019 Colonel Haynes was awarded an AM. Generous to a fault, he ensured that others on his committee were also honoured. Three received OAMs in the same honours list.

So if you are in the Parramatta area, be certain to see the monument, CLICK HERE for Museum opening times etc.